Why Wasps Invade Jackson Yards & How To Keep Them Away

If you or a loved one has ever been stung by a wasp, you know just how painful it can be. What’s worse, wasp stings are more than just painful; they can be dangerous, too.  You should want to do everything in your power to keep wasps from coming into your Jackson yard. In order to accomplish this, you need to know what attracts wasps to properties in the first place. Then, you can start to cut down on those wasp-attracting factors. Should your Jackson yard become overrun with wasps, you need to know the effective wasp control solutions that you can count on to get rid of them for you. After all, the safety of you and your family could depend on it. 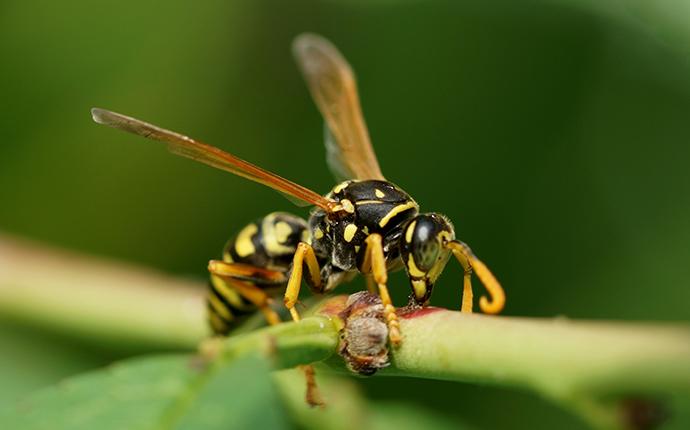 Wasp is a general term that applies to many different species of stinging insects. Here in Jackson, some common wasps that you might encounter include yellowjackets, European paper wasps, and bald-faced hornets.

Wasps are beneficial to the ecosystem which means we don’t want to get rid of them altogether. However, we also don’t want them building their nests on our properties as they can be dangerous animals. Not only can wasps inflict painful stings, but, in some instances, these stings have resulted in death. Although this is rare, if someone who is allergic to wasps is stung, they should seek medical attention. Furthermore, unlike bees, wasps can sting many times in a row. Therefore, you will likely be stung more than once if a wasp attacks you.

What Attracts Wasps To Properties?

Wasps are attracted to sweet substances upon which they can feed. Therefore, certain flowering plants are big attractors as they produce a sweet nectar that wasps love. Furthermore, things like sugary drinks and some food can also attract wasps to a property. Finally, wasps may come onto a property simply because there is a good place to build their nest.

To keep wasps from coming into your yard, you should cut down on any factors that might attract them and try to take away any places in which they could build their nests. To accomplish this, you should:

What To Do If Wasps Invade Your Jackson Yard

Given how dangerous wasps can be, if you come across a wasp nest on your Jackson property, do not attempt to get rid of it on your own. Instead, contact the professionals here at Havard Pest Control and let the experts take care of it for you. Don’t put you and your family at risk by letting wasps live freely in your yard. Give us a call today.