Home › Blog › Who Else Wants To Keep Fire Ants Out Of Their Hattiesburg Yard?

Who Else Wants To Keep Fire Ants Out Of Their Hattiesburg Yard?

How many times have you heard someone say that life was simpler way back when? Beyond new technologies and cultural changes, one thing our ancestors did not need to worry about was fire ants. Red imported fire ants first made their way to the United States in the thirties. 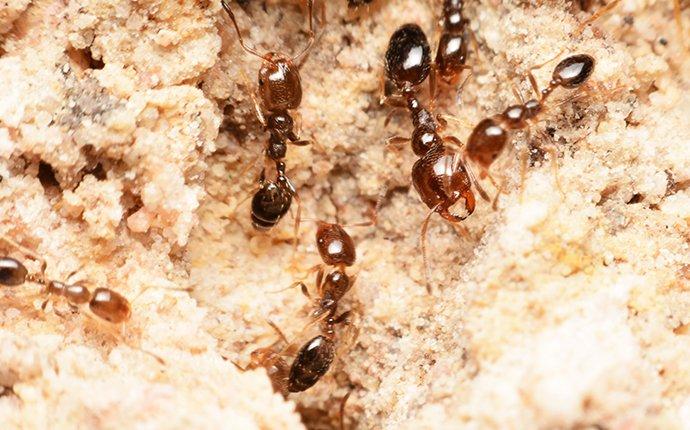 Fire ants make hills or mounds in open areas that are irregular in shape and vary from two to four square feet in size. They often nest in the soil near structural foundations or landscaping and can gain access to buildings through HVAC systems and AC units. These ants range in size from 1/16 to ¼ inch and are dark reddish-brown.

What Makes Fire Ants Worse Than All The Others?

While fire ants did not originate in the United States, there are now five times more fire ants per acre in the US than in their native South American habitat. These invasive insects escaped their natural enemies upon moving north and are thriving throughout our states. Their growing population and resistance to control measures combined with aggressive biting and stinging make these ants some of the most hated species. Fire ants can sting repeatedly. When attacking, these ants first bite and hold onto skin with their jaws and then continually inject venom with the stinger at the end of their abdomen. Fire ant venom causes a burning sensation. This is what gives these ants their name.

While fire ant bites and stings make them a medically important pest for people, pets, and livestock, they can also cause considerable environmental harm. These ants are known to damage crops such as corn, sorghum, okra, potatoes, sunflowers and more. They feed on seeds, seedlings, and fruit. This is a large concern due to the rate at which they reproduce. Once a colony reaches a year of age, reproductive alates are produced and six to eight mating flights occur each year with an average of 4,500 alates per flight. This means that 97,000 queens can be produced per acre of infested land each year. And this isn’t even the only means of reproduction. Fire ants are one of a select group of insects that can reproduce through budding. With colonies reaching upwards of 240,000 workers, these ants can cause significant medical and environmental harm.

Why Are DIY Methods Considered Ineffective?

There are many methods homeowners try to control fire ant populations, each with its own set of drawbacks.

Mound treatments such as drenches, surface dusts, and injections, all require each individual mounds to be located and treated. Without professional help, the likelihood of treating only some of the population and leaving several mounds untouched to repopulate is large. Another concern is that often the treatment stays on the surface and does not reach the queen. In this case the population is temporarily diminished only to return later, in force. Of the mound treatments, mound injections are more expensive but also a more effective option. They carry with them an additional risk of the insecticide leaking and becoming hazardous to the handler. Even with pressurized application, queens may be deep enough in the nest to be unaffected and re-infestation can occur.

Baits and broadcast treatments are another option. They increase the chances of insecticides reaching the queen if they are delivered back to the nest and are reported to be more effective than drenching, dusting, or fumigation.

Concerns with these methods include bait being dropped where ants don’t find it, colonies being well enough fed that they do not take the bait, baits that are light sensitive and inactive before being discovered by ants, and baits that are not specific to fire ants.

Other home remedies such as pouring boiling water or igniting flammable liquids over mounds are ineffective and just plain dangerous to humans and the environment.

There has been some research done around mechanical and biological controls but the efficacy of these methods has not been documented.

All in all the best and safest response to fire ants on your property is to call the professionals.

While they may not have been around at the first sign of fire ants in the thirties, Harvard Pest Control has over 70 years of experience in the pest control industry. We provide honest evaluations and quality products. Our unsurpassed customer service includes free inspections, same-day emergency services, 24/7 availability, and 100% satisfaction guarantee. Our highly trained technicians have the experience and knowledge to get rid of fire ants in Hattiesburg once and for all. They will build a custom plan tailored to meet your needs. Call today to make fire ants a thing of the past.