Havard Pest Control received an average rating of 4.3 out of 5 stars

What types of ants are in Alabama, Louisiana, and Mississippi?

Ants live together in large groups, and have a complex social structure. Ants are some of the most common pests to be found in and around homes throughout our areas. They are identified by their three distinct body regions: the head, thorax, and abdomen. Ants also have antennae. The reproductive members of a colony are the only members that are winged. Depending on the specific species, ants can range from tiny (⅛ of an inch) to large (½ of an inch). Ants come in a variety of colors, including black, brown, red, and yellow. 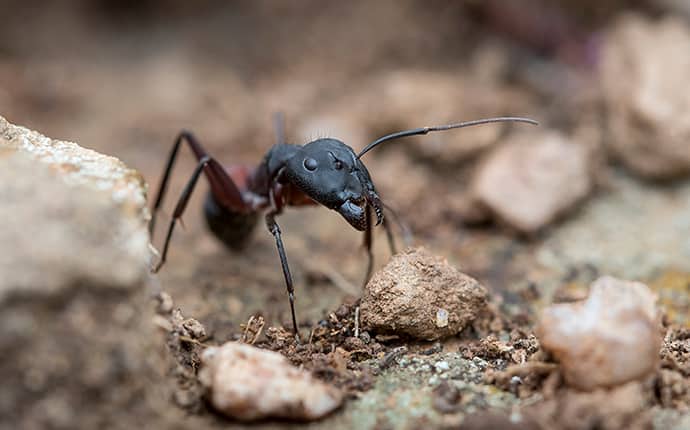 Of the many ants living in the United States, carpenter ants are some of the largest to invade homes. They are typically black in color, with some having reddish or yellowish markings. Workers have large, strong mandibles that they use to tunnel through wood. Carpenter ants do not feed on wood like termites. Instead, they create tunnels and nesting galleries within it. Carpenter ant infestations that are not eliminated in a timely manner can cause extensive structural damage that is expensive to repair. 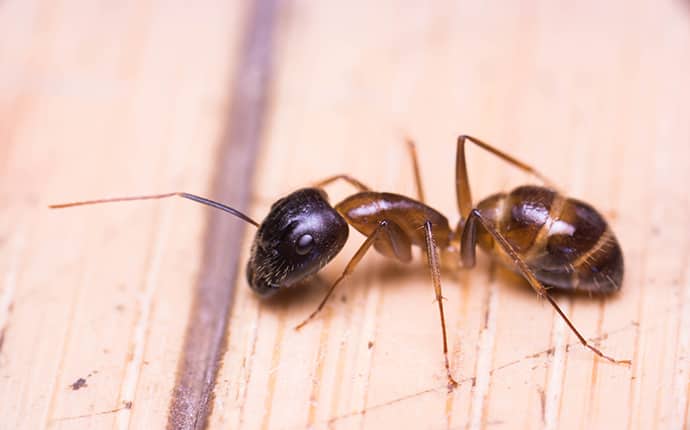 These are small, black, household-invading ants that are attracted to sugar. They are usually found living outside, foraging for food in garden areas, but also often find their way inside while foraging for food. Sugar ants can enter homes in large numbers and, once inside, are difficult to control and eliminate. 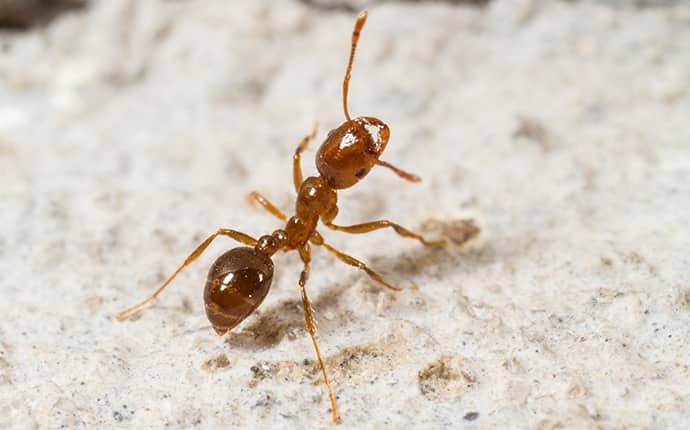 These are small ants that are reddish-brown in color. They are quite aggressive and easily agitated. Red imported fire ants will defend themselves and their nests against anything they view as a threat. They deliver painful stings, in some cases triggering severe allergic reactions that require medical attention. These ants mainly live outside but, if they do find their way inside, they can damage electrical wires and equipment. 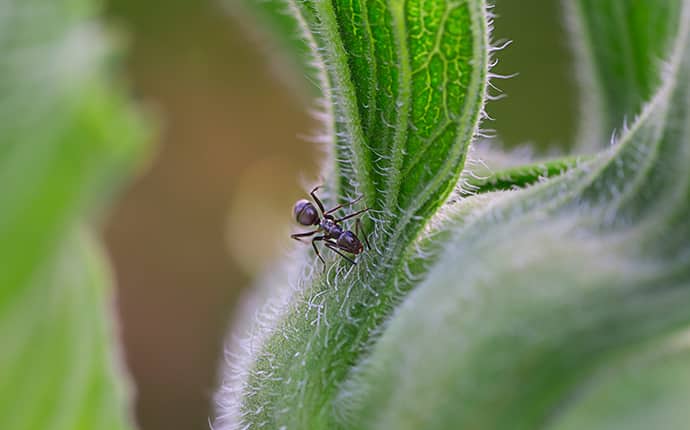 Odorous house ants are small, dark brown or black ants. These ants are usually not identified by how they look, but rather how they smell. They give off an unpleasant, rotten coconut smell when they are crushed. 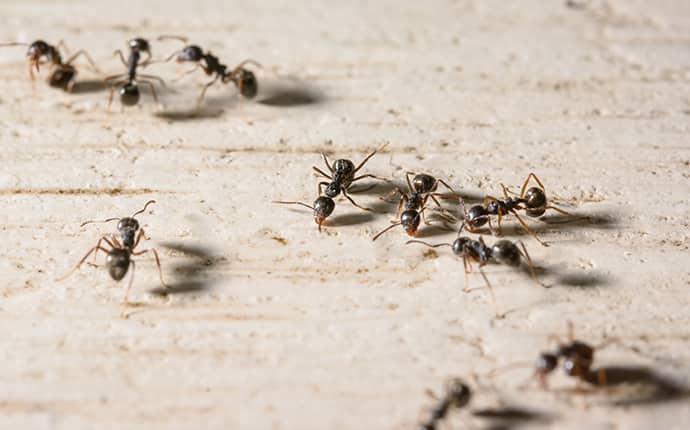 As their name describes, these ants are small in size and are dark brown to jet black in color. They live together in large colonies with many queens. These ants forage for food together, creating long trails of ants that are often seen on sidewalks, walkways, and driveways. These ants are most active during the summer months. 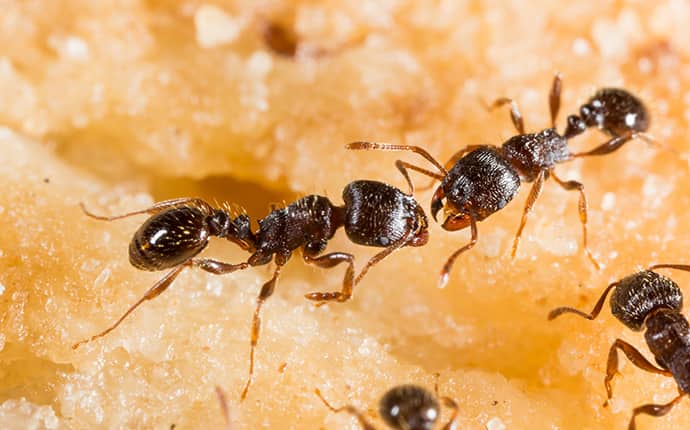 Pavement ants are most often found nesting in the cracks of pavement or cement. Pavement ants are a common species of nuisance, house-invading ant. Adults are brown to black in color. Their heads and thorax are covered in grooved, parallel lines. These ants can become a problem inside homes that have stone foundations or dirt basements. 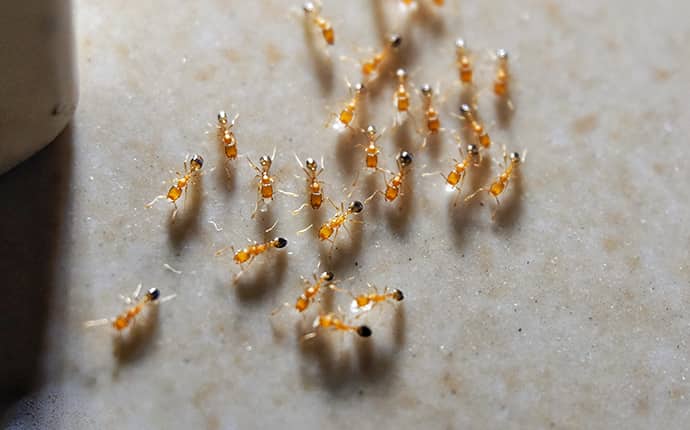 Pharaoh ants are a small species of ant that have pale yellow to light brown colored bodies, and their abdomen are almost black in color. These ants live in rather large colonies, and are difficult to control due to their ability to “bud.” If disturbed, members of the colony will migrate to new locations to establish several new colonies - this process is referred to as budding. Pharaoh ants spread many serious diseases, including salmonella and Streptococcus. They commonly invade restaurants, hospitals, and homes. Inside hospitals, they are known for invading patient wounds and intravenous lines. 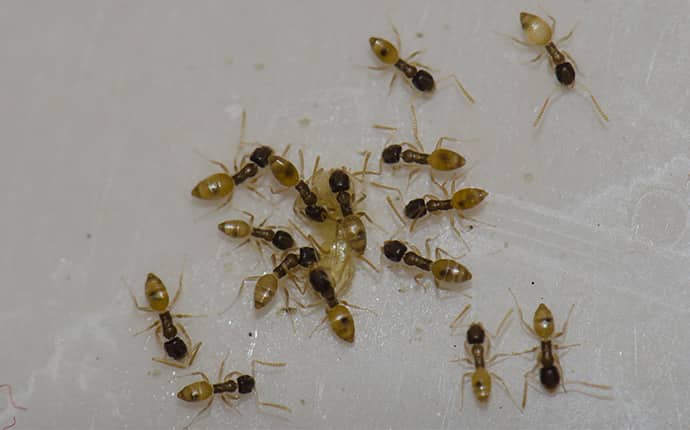 These ants live together in massive colonies. They are typically found nesting outside. During periods of harsh weather, they move inside homes and other buildings, traveling together in long lines along fence lines, tree branches, or utility wires. Argentine ants are attracted to areas of high moisture, and their presence inside homes can indicate that there is a moisture issue present. These small ants are shiny and are dark brown to black in color. They can also be identified by the musty odor they give off when crushed.

Ants are pests that typically enter homes and other buildings at the ground level. Their small size makes it easy for them to enter homes through cracks and crevices in their foundation, underneath basements, or through ground level exterior doors. They may also use the branches of trees, shrubs, or utility wires to gain access to the exterior of your home.

Where do ants hide?

Inside, ants are found hiding out in various areas of your home, depending on their exact species. Typical ant hiding spots include wall voids, underneath floors, behind baseboards, and inside structural wood (carpenter ants). Ants like to be near their found food sources. Many species like dark, damp, humid areas, and can be found underneath kitchen or bathroom sinks and behind large appliances. Others like to nest in or near heating units and electrical equipment.

What are the signs of ants?

To determine if ants are nesting on your property or inside your home, be on the lookout for the following signs:

■      Witnessing a “swarm.” A swarm usually occurs once a year. This is when winged reproductive members fly away from a mature colony in order to mate and start a new colony.

■      Seeing large numbers of live ants traveling throughout your home, especially in areas where you prepare and store food, such as in kitchens and pantries.

■      Finding lines of ants traveling to and from the exterior of your home.

Can I get rid of ants myself?

Ants are invasive. They can be damaging to the structure of your home, and dangerous for you and your family to be around. We strongly encourage you to call a professional as soon as you suspect that you may have an ant infestation. Call us at Havard Pest Control to take advantage of our 70 years of pest control experience.

There are a few things you can do to try and keep ants from entering your home:

■      Seal cracks and crevices found in your home’s foundation and exterior walls.

■      Seal paces around utilities (pipes, wires, air-conditioners, and ducts) that enter your home through its exterior.

■      Trim trees and bushes away from the exterior of your home

■      Leave a barrier between any soil or mulch and the foundation of your home.

■      Remove any wood from your home that has been damaged by water.

It's Time To Start Thinking About Bed Bug Control In Louisiana

Want to protect your Louisiana home against bed bugs? Here are the steps you…

What To Do About Termite Infestations In Louisiana

Termites are active all year long, but they’re especially prolific in the…

I Am Worried About Moisture Inside My Alabama House

If you think moisture around your home isn't a problem – think again. Moisture…